The Russian and Ukraine War By the Numbers

Why let the media tell you about the Russian and Ukraine War when certain assets can unravel what the smart money and their 1% access really think what's going on.

Yesterday was international women's day, so my wife took it upon herself to teach me a lesson.

She showed me a picture of Golda Meir, the fourth Prime Minister of Israel. We both saw the movie about her with Ingrid Bergman. It opened with Golda hiding in the basement of her home from a gang of rabid anti-semites trying to kill every Jew they could find.

She vowed then and there never to have to hide from these animals again. That's why she moved to Israel.

Golda Meir holds a special place in our heart. She lived on a kibbutz for a number of years. That kibbutz, located in the Jezreel Valley, is walking distance from our home.

When someone posted her story and linked it to Russian brutality, my wife laughed.

My wife was born in the Ukraine and grew up in the Soviet Union.

No stranger to the word zhid, she showed me here reply to this post:

Golda Meir grew up in Kyiv. The murderous anti-semitic rage she fled was not from Russia, but Ukraine.

Bottom line: Don't believe what you read, especially when the media chooses sides.

Act on the Facts

This doesn't vindicate the horrors Vladimir Putin has unleashed on the people of Ukraine. But we have to put into perspective the fact that a few months before the war started, for the first time since the end of the Cold War, Ukraine was upgrading its army to meet NATO military standards. They signed a defense agreement with America. The Biden Adminstration, looking for anything to make Joe Biden electable, was taunting Putin for months.

The media crafts Putin as the cool headed cunning Sovietmaster who made a calculated, yet aggressive move.

Look beyond what you see and it's the Americans and Ukrainians who might be the true ringmasters.

Now to the Numbers

Either way, we need to know where we stand.

Let's take a look at some metrics which can guide us as to the next step in this Russian and Ukraine War.

We start with the obvoius, Natrual Gas. 40% of Europe's natrual gas comes from Russia. What is the price saying?

Gas has been steadily going down over the past week. Could the uncertainty be ending?

This war began with Russia using "kid gloves." They saw Ukraine as their brethren and didn't want to bloody them. They thought the invasion would be quick and smooth.

The Ukrainian resistance proved them wrong. As a result, they have taken the gloves off and are hitting their prey with everything they've got. That means using their air force.

This may be enough to either conquer the rest of the country, or occupy enough of it to claim victory and stop fighting.

Europe gets 27% of it's oil from Russia.

Does this war "wind down" with sustained sanctions on Russia? Could be. The world might be at war with Russia longer than Ukraine.

Let's take a look at two other charts,

Wheat. Ukraine accounts for 10% of global wheat production. Russia accuonts for almost a quarter of the world's wheat. 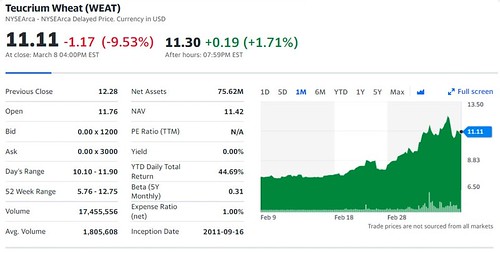 Corn. Ukraine and Russia account for 15% of global corn production.

Both have been topping off for the past week.

Price action, guided by the smart money going in and out of these commodoties, is telling us that the instability and uncertainty between Russia and Ukraine may be leveling off.

But the greater global picture is still undeveloped.